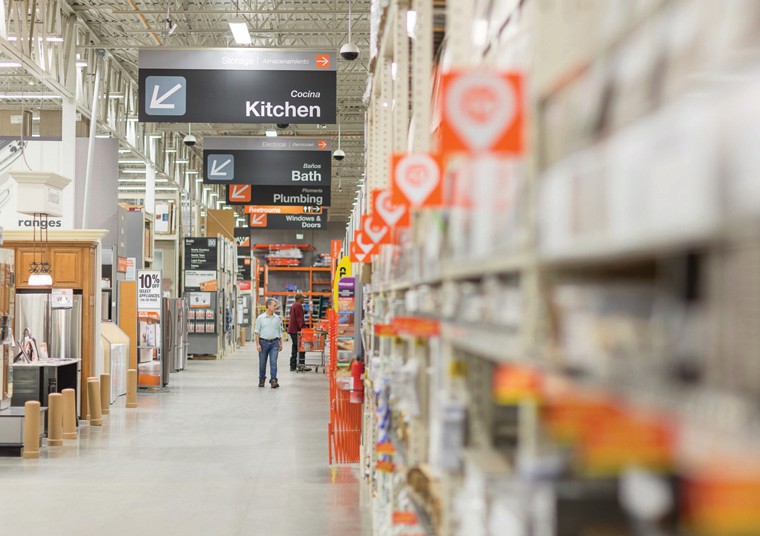 The Home Depot proposes to build a new store on U.S. 41 East at Habitat Road, about a mile northwest of Collier Boulevard. COURTESY OF HOME DEPOT

Q: Any truth to a new Home Depot at 41 and Collier in Naples? If so, any idea where it will be built? Will they close one of the other two? Thanks. — Mary Ryan, Naples

A: The Home Depot company proposes to build a new 132,549-square-foot home improvement business on U.S. 41 East at Habitat Road, about a mile northwest of Collier Boulevard, but the development news is not ready for a corporate announcement yet. Early details, though, are available from documents recently filed with the Collier County Growth Management Department.

The proposed store site at 11990 Tamiami Trail E. is across U.S. 41 from Lely Resort on a collection of six undeveloped parcels of land totaling slightly more than 15 acres. The Home Depot proposes to rezone the six vacant parcels from C-3 intermediate commercial to C-4 general commercial or another appropriate zoning district while amending the growth management plan to allow for a big-box hardware store. 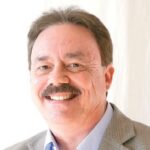 The wooded property forms a narrow strip in front of Marco Naples RV Resort on Barefoot Williams Road that is southeast of the Hitching Post Plaza and RaceTrac gas station. The new store is planned only about one mile away from the Lowe’s home improvement store in the Shops at Eagle Creek at U.S. 41 and Collier Boulevard. Lowe’s, of course, is The Home Depot’s biggest competitor nationwide.

The project proposes a 106,796-square-foot home improvement store with a 24,459-square-foot garden center on its southeast end. This is consistent with the typical Home Depot prototype, which averages 106,800 square feet with about 28,000 additional square feet of outside area for garden and landscaping products. 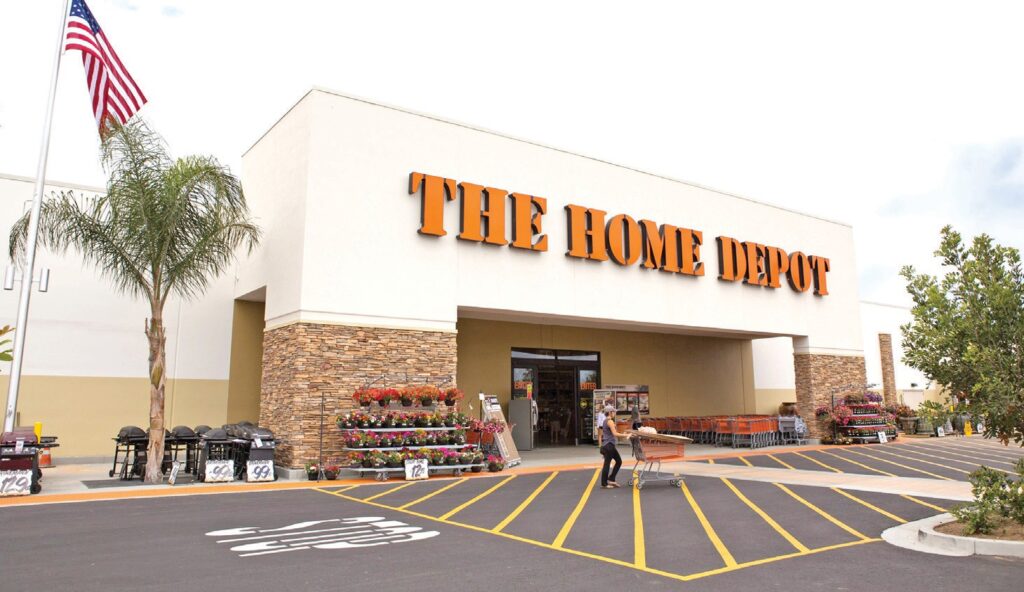 The Home Depot store on U.S. 41 East at Habitat Road proposes a 106,796-square-foot home improvement store with a 24,459-square-foot garden center on its southeast end. COURTESY OF THE HOME DEPOT

Primary access to the store is proposed from the six-lane U.S. 41 with a secondary access point off Habitat Road. An existing left turn lane on the East Trail serving northbound traffic is proposed to be closed as part of the access changes.

Lonnie Martin, a Naples resident since 1968 and an independent real estate broker specializing in local commercial property since 1969, owns two parcels totaling 6.43 acres, the majority of the acreage Home Depot would purchase to build the store. Contacted by phone, Mr. Martin said he is under a confidentiality agreement and could not discuss plans for the property. 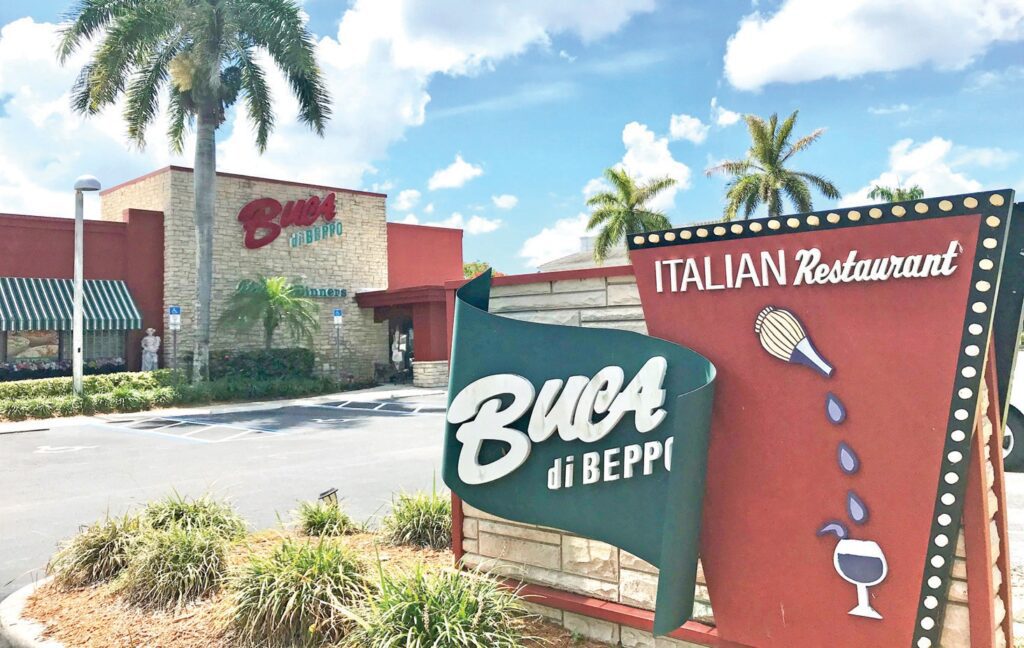 The Home Depot’s proposed location on the East Trail would be 7.2 miles away from its original East Naples store at Airport-Pulling Road and Davis Boulevard, which is 5.9 miles away from the North Naples location at Pine Ridge Road and Naples Boulevard. As far as wondering if the new store would replace one of the two longtime locations for The Home Depot in Collier County, don’t bet on either bright orange signs going dark. In Florida, The Home Depot averages one store for about every 138,000 people, so three stores in Collier County would be about right to serve its growing population of more than 400,000.

The two Florida cities making Home Depot’s top 10 list with the most locations are Miami and Orlando, with 12 and eight stores, respectively. Florida has more than 150 locations, about 7% of Home Depot’s stores, behind only California and Texas.

With more than 2,000 company owned stores in the United States, Home Depot is the world’s largest home improvement retailer, serving as a onestop shop for both professional contractors and do-it-yourself customers. It’s also one of the top retailers of any kind in the nation.

By the way, Home Depot is not the first development planned for that site. In late 2014, a 54-bed assisted-living facility was proposed at 11990 Tamiami Trail E. A single-story building of about 37,500 square feet was planned by the LaSalle Group Inc. for a 4.6-acre site. At that time, the LaSalle Group specialized in memory care and owned and operated 36 Autumn Leaves communities across the country. In May 2019, though, LaSalle filed for Chapter 11 bankruptcy protection in U.S. Bankruptcy Court for the Northern District of Texas.

A: After a run of more than 20 years, Buca di Beppo permanently closed Aug. 8 in North Naples after not renewing its lease at 8860 Tamiami Trail N. Replacing it next year will be J. Alexander’s Restaurant, an upscale dining concept planning its first Southwest Florida location.

The last area Buca di Beppo was a longtime venue where a generation of families gathered to break bread, share giant meatballs and celebrate togetherness in a place that didn’t take itself too seriously. Since launching in early 2001, the North Naples restaurant served Italian American fare family-style in a kitschy, eclectic setting that included tables with red-and-white-checkered tablecloths and whimsical, framed photos covering nearly every inch of wall space. The large circular table in the special Pope Room seated up to 18 amongst a tacky, tongue-in-cheek tribute to the pontiff.

The chain’s Naples location was extremely damaged by Hurricane Irma in 2017 but reopened after being closed for more than three months while its interior was refurbished. The restaurant concept, which obviously fosters closeness and large gatherings, did not fare as well as most in a socially distanced post-COVID world. Its kitchen increased revenue by churning out pickup and delivery comfort food for virtual brands such as Guy Fieri’s Flavortown and MrBeast Burgers, also owned by Orlando-based Earl Enterprises.

Buca’s next nearest location at Edison Mall in Fort Myers didn’t last long. It opened in early 2013 and closed after only four years. Buca di Beppo still has 69 locations nationwide with only four remaining in Florida. The nearest is across Alligator Alley in Davie, while the rest are in the Central Florida cities of Celebration, Maitland and Orlando. ¦